A little about the Royal Society of British Artists -  RBA

A group of painters met at Lincoln’s Inn Fields on May 21st 1823, to form the ‘Society of British Artists’, whose manifesto stated, ‘This organisation was not formed to rival existing societies but that every Member was to be at liberty to assist and support any other society.’

Although the Society was granted a Charter in 1846 it was not until Queen Victoria’s Golden Jubilee Year of 1887, under the leadership of James McNeill Whistler, that the Society won the right to the prefix ‘Royal’. Whistler raised the profile of the Society by setting standards of acceptance, which attracted the attention of not only London’s aristocracy and fashionable society, but also of both Monet and Alfred Stevens, who became Honorary Members.

In the years that followed, the Society attracted many painters and sculptors of note including Walter Sickert, Philip de László, LS Lowry, Henry Moore, Peter Greenham, Sir Roger de Grey, Carel Weight and Colin Hayes. For more about the RBA please click on the link below.

Full details can be found at the RBA web site at: royalsocietyofbritishartists.org.uk 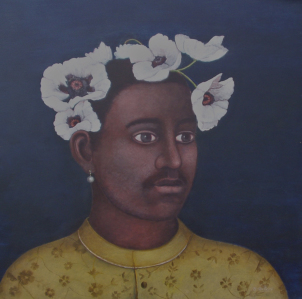 The Mall Galleries, The Mall, London

Nicola Slattery won the "Afred Daniels Personal Favourites Award" in 2014 at the  society's annual ecxhibition and was elected to membership of the Royal Society of British Artists (RBA) in 2015. In 2016 she was presented with The Artist Magazine Award at the society's annual exhibition and her work was subsequently featured in the January 2017 issue of The Artist Magazine.     Back issues available at "The Artist" magazine

At the society's annual exhibition in March 2017 Nicola Slattery was presented with the "Dry Red Press Award" for her painting "Songbirds" which is now published as a greeting card by the Brighton based Dry Red Press card publisher.  www.dryredpress.com 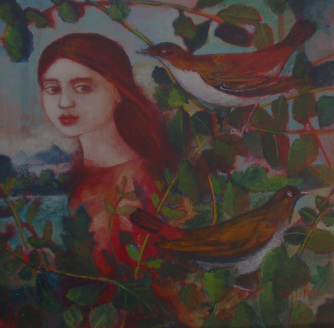 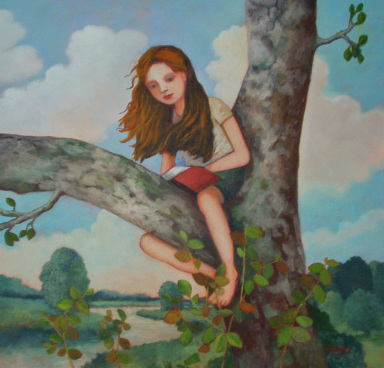 This painting is reproduced as a greeting card by Dry Red Press and the royalties support the Royal Society of British Artists.

Availble from January 2022 at: